The Recital
Glenn B. Gelman, Psy.D.

The children squirmed anxiously, eagerly, bedazzled by the hustle-bustle flurry about them.

Mothers worked at fever‑pitch, mending leotards, pinning tutus, making last‑minute alterations to hemlines.  Expectant fathers fidgeted, and, as if a bit out of place, busied themselves by checking and rechecking their camcorders.

Grandparents bounced babies on their laps or just waited, patiently.

The lights flickered, then dimmed. Rehearsal after rehearsal behind them, the little dancers practiced and readied, the curtain drew open.

Seated at the back of the theater near the exit, an elderly man and woman rested quietly. From how they were sitting, it must have been difficult for them to see the stage.

The lady looked almost listless, face drooped to one side, her weakened body slouched in her wheel chair. Her husband appeared frail himself, thick-lensed glasses, gnarled hands supported by a four-legged walker. His arms and legs tremored uncontrollably.

The children twirled and tapped. Awe-struck little ones waved to star-struck parents waving back. A child or two stumbled, adorably. The older ones performed more skillful pirouettes.

Cameras flashed. Innocents all. The audience abounded in sympathetic laughter and polite applause. 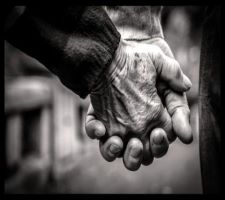 The old man began to work his hand to his right, ever so slowly. His effort was labored and strained. Physical pain etched his face, but the old man persevered.

His hand grew nearer and nearer his wife's. Even more slowly, and no less determined, his wife struggled, inching her hand toward his. Several times, her strength failed, and her arm fell limp.

They never once looked toward one another, but they didn't have to. Like dancers whose movements have been well‑rehearsed by a lifetime of practice, they moved in loving synchrony.

The recital, of course, was a great success. The would‑be ballerinas beamed. Proud parents gleamed.

And in a not‑too‑distant corner of the theater, an old man and old woman, husband and wife, dancing a special dance of their own, held hands together.

Author Note: Dr. Glenn B. Gelman is a Clinical Psychologist and a Personal Mentor