He was a “full-bird Colonel” of Napoleonic stature, always with an enormous Churchill in his mouth. The highest ranking officer of our army medical reserve unit and the rest of “the brass,” along with the rest of the troops, held him in singular high regard since he was the only soldier amongst us who had direct combat experience having previously served in a “real” war.

I was barely 18 years of age and only a lowly Private assigned to the tedium of “shuffling paperwork.” Not quite comfortable in my new military uniform, I couldn’t help but notice how “the old man” sparkled in his military attire, as if, his uniform and the unit he commanded were mere accoutrements of a “real” military man.

Whenever he entered the building it was, as if, all within his sphere promptly “snapped to attention” and it was entirely unclear to an awe-struck adolescent “weekend warrior” whether these reactions were the result of authentic respect for a superior man or anticipatory fear of a superior rank.

One day, while dutifully following an order from my Master Sergeant to procure a signature from his boss, I walked into the large mess hall and saw the Colonel, military coat neatly draping the shoulders of a nearby chair, sleeves equidistantly rolled-up and observed that he was rhythmically mopping the floor, always with with an enormous Churchill in his mouth.

He reviewed the document I presented, was its singular signatory and promptly returned to rhythmically mopping the mess hall floor. Bewildered by the patent incongruity of the most senior officer performing a lowly task which would have been more appropriate to delegate to the least senior “grunt,” I could not resist.

“Sir, might a Private ask a question of the Colonel?”

“Why is the Colonel mopping the mess hall floor when he has the authority to order any other soldier in his command to do it for him?”

“Sir, It would be my privilege and honor to finish the job you started as I am only a Private.”

“Actually Private, it is my privilege and honor to finish the job I started as I am only a Colonel...”

“Yes sir,” I replied, and promptly returned to complete the job I started.

The “old man” smiled in the knowing way a wisened “community elder” smiles, in their knowing way after a lifetime of grizzled experience, what a young man cannot possibly yet even begin to know, let alone smile about, and then the Colonel, promptly returned to rhythmically mopping the mess hall floor.

A year later, after being honorably discharged from military service due to a freak accident which resulted in a nerve-damaged left hand, while working a part-time job in a well-known jewelry company of that era, I found myself assessing the reactions of the full-time “hired help” each time the “big boss” entered the room.

Whenever he entered the building, it was, as if, all within his sphere “snapped to attention” and it was entirely clear to an awestruck part-time 19-year old employee whether this was a result of authentic respect for a superior man or anticipatory fear of a superior rank.

The other full-time employees had earlier cautioned me to “look busy” if the work was slow because the “big boss” had a “scary” reputation of being the kind of “old man” who would, occasionally, fire a worker who he believed was not completing the job they started.

Just my luck that on one particular dark and gloomy day, the entire production system was down and the workers were filled with anxiety and fear that if the “big boss” perceived them as not doing their job, “heads might roll.”

Then it hit me like a "ton of bricks” that there was absolutely nothing for me to do but to patiently wait until the wisened “community elders” of my company’s work unit returned me to ’active duty’ service. I looked down and felt increasing dread, but then, to my astonishment, something caught my eye...it was the floor!

Against the well-intentioned entreaties of a dozen or more co-workers, I searched for keys to open locked maintenance closet supply rooms, found what I was looking for, promptly returned and began rhythmically mopping the production room floor.

All of a sudden I heard my name bugled-out by the “big boss” for all to loudly hear and he inquired in a most serious and gruff tone...

“What do you think you’re doing, young man, mopping the company floor?” 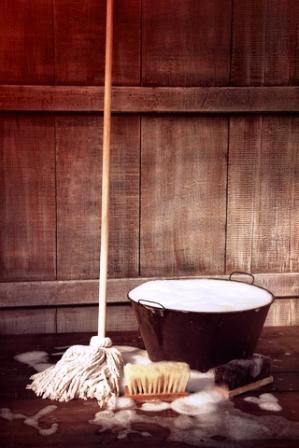 “We have maintenance personnel for that.”

You could literally “hear a pin drop” on the work floor as I later discovered the sure betting was on my getting axed on the spot.

“Give me the mop and I’ll show you how to mop a dirty floor...I’m an old Navy man...I can teach you the right way how to swab the deck.”

And in that moment I became his accidental protege and he my second serendipitous military mentor.

While the “big boss” eventually gave the mop back to me, so that I could finish the job I started, it was only after he had promptly returned to rhythmically mopping the production room floor for a very long while, sans cigar. He did so with the privilege and honor of a man who could not behave otherwise and all-the-while, whistled while he worked.

I was soon offered a full-time opportunity to work for the company in sales, management or as an apprentice jeweler, but I opted instead to focus on completing my college and graduate studies to devote the next 40 years to the field of clinical psychology, to finish the job I started... but the joke is on me because, now, I’m the “old man!”

To this very day, however, no matter what the challenge or need, if a floor is dirty, “mop’s here...”

Author Note: Dr. Larry B. Gelman is a Clinical Psychologist and a Personal Mentor